A little over a year ago, I dipped my bike into the Pacific before embarking on a cross country journey to meet Canadians who speak in different ways due to disability, hear their stories, and share them. On May 19th (the 1 year anniversary), I posted this video on the Kilometres for Communication Facebook page.

This is the same video we presented at the Breaking the ICE Conference at the Holland Bloorview Kids Rehabilitation Hospital on April 29, 2012.

The narration of the video is composed of blog excerpts during our journey. Enjoy 🙂

Today was what I consider to be the beginning of Part II.
Technically the half-way point of the trip was near Sault Ste. Marie and the
rest of the family joined us in Tobermory, 300km North West of Toronto, but for
some reason I consider Toronto to be the division of part 1 and 2. I was afraid
that I would have a really tough time leaving my friends, comfy bed, and house
behind. In the end, that wasn’t a problem.

Our family was up early today. Kerr got set up in his
Wike trailer which attaches to my bike. It was a bright sunny morning—perfect day
for embarking on the next portion of the trip…except that I had stayed awake
until 3am catching up on blogs the night before. Our schedule has been bustling
and I had to take advantage of the high speed internet before I left the city.
It didn’t feel like we were leaving our home for the next month. It felt more
like we were going for a leisurely morning pedal. Kerr, my dad and I biked up
to the Holland Bloorview Kids Rehabilitation Centre for 8:30am.

Kerr and I arriving

Kerr and I go back with the Bloorview Centre. Kerr
received services for many years from Bloorview, and I took swimming lessons
there when I was six and seven years old. When we pedaled into the main
entrance of the centre, there was a mass of people cheering, whistling, and
clapping. There were several encouraging banners held in the air. What a
greeting! I’m feeling more natural standing in front of crowds, but I wasn’t
sure of what to do next after I got off the bike. Luckily for Kerr and I,
people came up to introduce themselves, so we quickly became occupied. There
were also many familiar faces in the crowd. Many of our first supporters were
standing in that crowd. 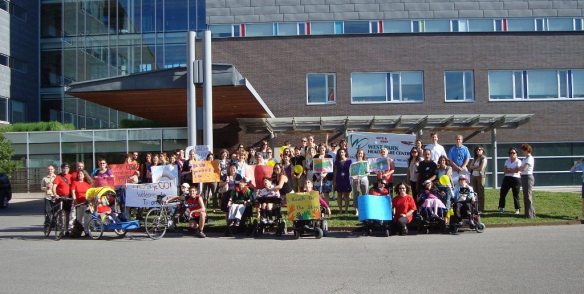 The foyer of the centre was devoted to the event until
3pm—although we would be leaving around 10:30am to begin our journey to
Peterborough. There was a booth for people to try communicating with
alternative methods, spin bikes to be pedaled, photos and footage from our
trip-to-date to watched, and a Kilometres for Communication cake to be eaten.

Kilometres Cake! A motorcycle would be easier...

I want to give an immense thank you to Laurel for taking
the initiative to arrange this fantastic event. Thank you to everyone else who
volunteered their time to make this event happen, and to everyone who came out
to show their support.

Lynda, Carolyn, and Theresa—it was lovely meeting you
all. I had one of those embarrassing moment where I was constantly
mispronouncing someone’s name. My apologies Carolyn, for calling you Karen so
many times! Lynda had a piece of writing prepared for us. In her intro she
talked about a person coming up to her in the subway and asking her if she was
learning her ABC’s. I don’t even know what to make of that. Lynda is obviously
an adult. She has a computer in front of her which she uses to communicate. It’s
not uncommon for people to make the mistake of assuming inability when they
meet someone with an obvious disability, but this “ABC” question seemed absurd.

Kerr had joined me on the ride to the centre, but he was
going to take a break and travel to Peterborough by van. The roads out of
Toronto through the burbs are nasty—very few bike-friendly routes and lots of
traffic. I wouldn’t be too lonely though; I had company. Katie and Katie,
Speech-Language Pathologists from the Niagara Peninsula Children’s Centre were
joining me for the full ride to into the Kawarthas. Also, a group of 8 from the
Holland Bloorview Centre joined us for the first 5km or so north on Bayview
Avenue, through the Bridlepath, and up to Don Mills and Sheppard. On the side
streets (which never seem to last long enough), we were nonchalantly cruising
in a pack, dominating the road and chatting with each other—I assure you, we
didn’t pedal up Bayview in that manner.

Just before the departure

Eventually, the herd left us to loop back to the Holland
Bloorview Centre. Katie Clark, Katie Angle, and I began our adventure. Rather
than sounding like a coach and calling them by their last names for the next
paragraph, I’m going to give them nick names. I’ll refer to Katie Angle, the road
biker, as “Wind Breaker”. We had great weather for the most part, but every now
and then we had a headwind. Wind Breaker and I took turns pulling when the road
was facing north into the wind. Katie Clark, the mountain biker, shall be
dubbed “Speed Demon”. She always seemed to pass us on the descents. Ok, on the
spot nick names are set, they’re not the greatest, but now I can write this
paragraph. It may sound quite funny. 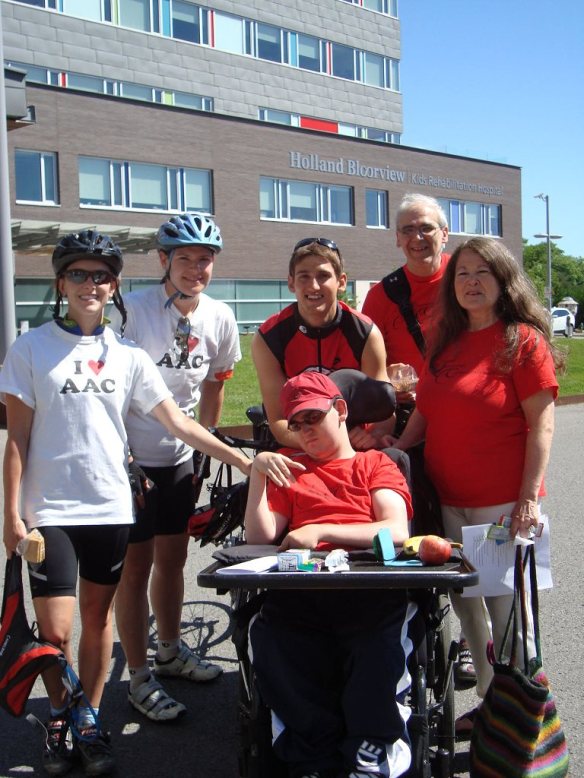 Speed Demon’s handlebars kept coming loose as we flew
over the bumpy suburban arterials. These wretched roads can make any road bike
chatter, but there was definitely something strange going on with Speed Demon’s
bike. We stopped to tighten down the bolts several times. Thank goodness for Allen
key sets. Then we noticed a spacer was missing, preventing the stem from being
tightened down completely. The smartphone came out, “bike shop” was searched,
and a detour was planned. There was only one bike shop that wasn’t far off our
route. After calling and receiving some sketchy directions, we found the tiny
shop. It was about the size of our RV. Ok, maybe a little bigger, but if you
include the RV’s bunk it had about the same square footage. The shop was
cluttered with several used department store bikes and ample boxes on a shelf
of miscellaneous metal tid-bits salvaged from generations of bikes. I was
thinking “surely there must be a spacer somewhere in here”. The owner and his
wife didn’t speak English very well, but they seemed to understand what I
wanted. Through gestures and pointing, we were able to make our point. They
didn’t think they had the part, and they were right, but I insisted on looking
through a tin of metal potential. A 140km ride wouldn’t be manageable if we had
to stop every 5km to tighten bolts. I found something that worked. We were on
our way. In that tiny bike shop in Markham, there was a perfect example of
alternative communication.

We passed through Pickering, Whitby, and Oshawa and then
made our way north into the country. On the final 50km stretch, Wind Breaker’s
parents had pulled over at the side of the road to cheer us on. We arrived in
Peterborough by the early evening. A young man with physical challenges,
Marshall, was at the Breaking the ICE conference which Gail, Kerr, and I
presented at in early June (Gail and I skyped in from Calgary to present).
Marshall is a cyclist and decided that he wanted to bike with us when we came
near Peterborough. At a tiny park on the South East edge of Peterborough, we
met Marshall and his family—his mom, Paula, his dad, Leo, and his grandfather,
Ray. Marshall has a one of a kind adapted bike. It’s tough to explain. Picture
a unicycle welded to a chassis with two front wheels. Marshall pedals on his
stomach, almost lying down. Kerr also joined us for these final couple
kilometres into Peterborough’s Beaver Mead Park where a BBQ event was taking
place. There wasn’t much of a shoulder on the 4-lane road. Wind Breaker, Speed
Demon, Marshall, Leo, Kerr and I took up a full lane. We had a support car
driving slowly behind us for safety. We were approaching a somewhat busy
intersection. Out of nowhere, a cop car passed us slowly with its siren on and
stopped in the middle of the intersection. The officer got out, stopped
traffic, and escorted us through. That was a pleasant, unexpected surprise.

We arrived at Beaver Mead Park in Peterborough, just as
the sun was about to set over the Trent. It was quite beautiful. The only problem
was that the glare from the sun made it difficult for some people to see the
screen of their speech generating device.

I finally got to meet Marlow and Heather Horne, who have
been part of our crew off the road. They’ve managed to get us media, accommodations,
and have given us great advice and encouragement from thousands of kilometres
away. The BBQ was a nice informal event to wrap up a long day. I’d like to
extend a warm thanks to Janet for planning the BBQ and to anyone else off the
radar for making it happen.

Greg from Chex TV was waiting for us. We were running
late, so I’m glad he stayed around because he ended up putting together a great
piece that was aired several times in 24hrs. You can watch the video segment
from Peterborough online at the Chex TV website: http://www.chextv.com/News/LN/11-07-07/Kilometres_for_Communciation.aspx

Still catching up on blogs…From Montreal