I know. It’s been too long since I last posted a blog. I even had several failed attempts logging into my WordPress account because I couldn’t remember my password. I assure you, I haven’t been living a couch-potato lifestyle. It’s actually been quite the contrary. Despite the blank blog, there’s been interesting stuff going on for Kilometres for Communication this fall.

In September, I got this nagging idea that wouldn’t leave my head. It was the same type of idea that wouldn’t leave my head three years ago when I decided to cycle across Canada for AAC. What was this idea? Some of you may have seen pictures of me dressed up in a pink tutu, pink women’s shirt, bunny years, and a wand in hand. A couple of you even saw me running down Queen Street in Toronto dressed in this magnificent, flamboyant costume. For those of you who have no idea what I’m talking about, this appears quite obscure. You may think that I have changed. I promise you that I have not.

So why the bunny costume? It’s all in the name of fundraising.

Thanks to Jeff Cheah for the marathon photos.

My idea was to run my first marathon in support of Kilometres for Communication. Two close friends, Jason LaPorta and Harrison Willis, joined me as well. We registered for the race a mere three weeks before the date of the race. This was quite last minute to decide to start training for a 42.2km race. Nonetheless, we trained together and set up a donation page for our run. In a little over a week, we raised over a $1000. Thank you to everyone who supported the cause and helped to empower Canadians who communicate in alternative ways. 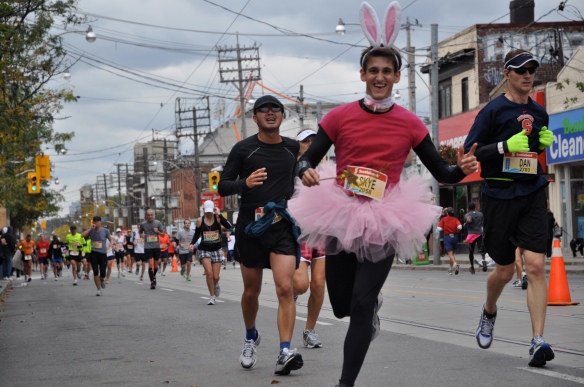 Still loving life after 30km. Trust me, a lot more tired than I look.

A week ago Saturday Kerr and I participated in Rick Hansen’s 25th Anniversary Man in Motion Relay when it came through Toronto. It’s quite phenomenal how well Rick’s campaign has managed the logistics of coordinating a medal bearer every 250m. Kerr and I each wore the medal for a stretch along Eglinton Avenue as the relay travelled through Leaside, making its way towards downtown.

Kerr's turn to bear the medal

Me passing the medal onto James, a war veteran

Kerr and I gave our relay co-ordinator, Kyle, a heart-attack scare. We nearly missed our spot in the relay. I literally had to sprint down an Eglinton sidewalk with Kerr holding tight in his Wike jogging trailer, just to get to our medal exchange spot on time. It truly was a unique experience. There was a traffic jam on Eglinton. As Kerr and I ran in front of a police cruiser, we passed traffic in the left lane to top-40 pop songs played from the campaign RV in front of us. It was a surreal experience having hundreds of drivers–many stuck and perhaps frustrated–staring at us as we jogged past.

And the relay goes on. Kerr and I just after we finished our portion

On the 25th of November, we’ll be presenting our journey across Canada to the Mabin School in Toronto. We’ll be sharing stories that we heard from Canadians who speak in alternative ways, and we’ll be facilitating interactive activities which will allow the students to enhance their understanding of the barriers people who are differently abled face. There are also tentative plans to present to students at a high school near Barrie, Ontario.

During my bike trip, I always tried to incorporate a discussion about AAC,  equality, human rights, or inclusion into the events that occurred on a particular day; often using the challenges of the journey as metaphors. For me, one of the primary purposes of this blog is to create understanding. So here’s one thing that’s been going through my mind—actually covered in one of my courses. It was really just a side note in one of my psychology lectures, but it stood out to me.

When asked to fill out a self-esteem scale and a scale of happiness, people who have quadriplegia reported the same levels of positive self-esteem characteristics and happiness as anyone else (same idea as people who win the lottery are only happier than the average population for the first 3 weeks after the win). I think many people assume that people faced with physical challenges live a lower quality of life (which is often incorrect). Pity is not the right attitude. Empathy and open-mindedness to opportunity is. It is precisely this attitude which enables people to feel positive about their lives. I do wonder whether people who are capable of more than they’re given opportunities for, would express lower values on such scales. An example would be someone who has the intellectual ability and the physical control to spell sentences with their eyes, but has not been given the support or means to do so. How do you find these people whose potential has not been discovered? How would you define them to give the survey validity? If you could find them, their hidden potential would no longer be hidden. It’s relatively easy to survey people who have quadriplegia compared to surveying such an undefined group. Hypothetically, even if there were a way to find these people, test them, and then conclude that ‘people whose potential is not fostered due to an unrealized need for AAC, are more likely to report lower levels of happiness and self-esteem’, what needs to be done is enable, not pity. Apologies, that last sentence was a mouthful. Still with me?

I hope the marathon pictures have amused some of you. I’m glad to have finally posted a blog for the first time in months. There will be more to come from Kilometres for Communication in the near future. I already have another nagging idea.

We are 18 days away from our launch at Port Renfrew, on the west coast of Vancouver Island—this doesn’t seem real. Everything is coming together—and we have many motivated, generous, and creative people to thank.

On Friday, Kerr, Gail and I gave a presentation (with the assistance of Chantelle Walters, one of Kerr’s wonderful communication assistants) to the students at the Mabin School in Toronto. We wanted to give them an idea about how to communicate with someone who doesn’t have speech and to talk about how challenging it can be to get heard and included when speaking in alternative ways.

Earlier in the day, before we gave our presentation, the students at Mabin had a silent recess. If they wanted to tell a friend something, they had to use gestures, letter boards, or pen and paper. This experience helped them understand how frustrating it could be to not use their voices. We discussed how we feel when people ignore us or interrupt when we try to speak. We talked about how often incorrect and unfair assumptions are made about someone’s intelligence if he or she doesn’t have speech. Everyone tried communicating with blinks (like Kerr does).

The students were loaded with questions (some quite brilliant), and Kerr answered them with his blinks. For those of you reading this blog who don’t know Kerr, he blinks for “yes”. If he doesn’t blink, we ask him if his answer is “no”, and if it is, he blinks. He also has a speech generating device, but in many situations it’s slow in comparison to using yes/no questions and blinks. Kerr probably explains his communication better than I do—if you’re interested, you can read his story on our website (http://kilometresforcommunication.com/stories/kerr-wattie) to learn more.

There are many things we take for granted on a daily basis—what about our ability to tell a joke? Gail told the story at Mabin about when Kerr first got his communication device, and she was giving him a glass of water one day. A sly grin came to his face. He was on the food page on his communication device; he hit his switch, and said “It’s too spicy”.

Gail and I are less than a week away from driving out west. I’m still training, but it’s been difficult finding the time in the last week. A number of Kilometres for Communication events are being planned. We’ll keep you posted!